3 Effective Brand Campaigns from Around the World 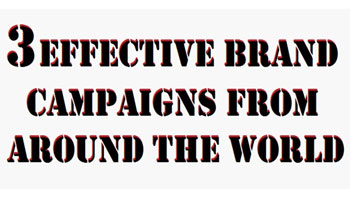 Branding campaigns are not easy to set up at all. There are just so many factors that have to be considered including the cost, market, audience and channels that will be used in the marketing campaign. Anyway, technology has made things a little bit easier by providing a whole lot of digital marketing options. There are several strategies that you can employ to establish your brand and also to remind people that your brand is still in existence. You will have to be exceedingly creative if you would like to get people’s attention.

Setting up a creative brand campaign

You do not have to be a comedian by profession in order to make people roll on the floor laughing after they see your witty campaigns. As a matter of fact, there is a world of difference between funny and creative. It is possible to have a creative brand campaign that is not going to make people laugh. It could make people cry for all the market cares but as long as it gets the message across then it is effective. The goal is to evoke the emotions of all who view the content of your campaigns.

For the sake of simplicity in this article, let’s just use creative to mean humorous. In that light, there are several brands that have gone critically viral owing to their creative campaigns. These are the brands that have millions of views on YouTube for their advertisements. They have people rushing home simply to catch their ads on TV and such things. Even you have that TV ad that just gets your undivided attention when it pops up on the TV. Here are some of the most creative campaigns ever: 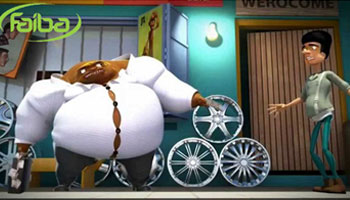 This brand is one of the biggest internet service providers in East Africa. Everything from the name of the brand to the advertisements that they present on TV and YouTube is hilarious. It might sound like some clever name but really Faiba is a corruption of the word fiber and you can guess which word was modified to make Konnect. The company deals with installation of optic fiber cables and has some of the best internet plans for high speed internet.

The brand started out not more than five years ago but it has gained a lot of mileage all over Kenya’s major cities. It all started out with one extremely funny ad that made fun of how people in the modern day still use slow internet while the humans in the Stone Age had even faster internet (as if they did). Everything from the graphics to the storyline of their ad was just clever. Eventually, it became a series of ads with multiple episodes, which gave the brand the stature it possesses in the market currently.

This brand campaign was meant to establish a brand that was not in existence before. In order to do this the marketers understood that they had to capture the attention of people and what better way to do that than to make them laugh? It all started with a short clip on TV that got everyone wondering what the ad was all about. When it was finally released in its entirety, people would break ribs laughing.

If this was not a creative campaign then nothing is creative on this planet. TNT is a Belgian television station and they wanted to launch a broadcasting series in the Netherlands. To do this, they took to the streets of Belgium and created one fantastic video. They placed a red button in the middle of a quiet square and above it they hang an arrow pointing to the button. The arrow read, “Push to Add Drama”. Naturally, people thought it to be weird but then some did actually press the button.

A series of dramatic events unfolded including the arrival of some ambulance with paramedics who drop the ‘patient’ from the stretcher several times. A cyclist rides into the ambulance’s door and there is a fist fight between the cyclist and the ambulance attendant. To spice things up, some scantily dressed woman rides onto the scene on a motorbike being chased by a car. A bizarre team of rugby players randomly shows up to pick a body of a ‘dead’ man and then each of the characters goes away. The TNT tagline rolls down a banner.

The video went viral having been shared more than three million times. It is undeniably one of the smartest and best executed live brand campaigns of all time.

To start with, it is funny and relevant to the company’s theme- they really do know what drama is. Second, it employed both traditional and digital marketing strategies. It started out as a live campaign and the resultant video was used to make the digital marketing activity. The best thing about this campaign is that it works on people’s curiosity. What would you do if you found a big red button in the middle of the street saying ‘press to add drama’?

It would not be fair to complete this article without talking about the True Blood series by HBO. The thing about this branding campaign is that it left many people shaking their heads after an OMFG moment. The campaign is completely bizarre and it will make you go something like, “They cannot be serious”.

There are many elements that went into the entire campaign. The funniest part was the use of posters calling for equal rights for vampires and human beings. It went something like ‘support the vampire rights amendment because they too were humans. If you supported this cause then you would have to visit a certain website. This created a lot of traffic for the site and made True Blood one of the most anticipated show debuts on American TV.

This campaign was focused and that is why it is awesome. It was targeting horror aficionados all over America. Second, it employs excellent storytelling and that is how people’s attention is captured. It had the ‘these-people-cannot-be-serious’ factor that aroused curiosity and made people super eager to find out what this thing is all about.

Developing a creative campaign to establish or market a brand is not all that easy but then it is also not impossible. There are so many companies that have been able to pull off extremely creative branding stunts. The above mentioned are just some of them. You too can make it into the list of most creative brand campaigns ever.

Jack Dawson is a web developer and UI/UX specialist. He likes to share knowledge and points of view with other developers and consumers on platforms. Visit our website if you are looking for a web design company based in New York that can deliver.

ANRO: Digital Marketing in your Mailbox

Unlocking the Value of Connected Cars

Comprehensible Distribution of Training and Information...

The Current Focus is On Comprehensive Solutions

Big Data Analytics and Its Impact on the Supply Chain

Carmax, the Automobile Business with IT at the Core

The CIO's role in rethinking the scope of EPM for...

Transformative Impact On The IT Landscape

Get Ready for an IT Renaissance: Brought to You by Big...

Technology to Leverage and Enable

Buy, Build Or Both?